This is another of those collections of weird sonic manglings aimed at the connoisseur of experimental dance music. Ostensibly aimed at techno, ambient and industrial, these sounds would be
usable wherever way-out futuristic sound design was required. Metallic grindings, electronic squelches
and robotic malfunctions are the mainstays of this collection, with an overall dark sci-fi feel.

There is heavy emphasis on analogue synthesis and effects, although abrasive granular-style textures also abound. I found the synth programming particularly good, as real effort had been put into creating
the kind of movement and expression usually lacking in such libraries. Many of the sounds also had
great bite, really tearing their way out of my speakers! Effects major on the distortion, but there's also
some brutal flanging and phasing in places. Delay and reverb are mostly used fairly carefully, although
nothing is free from abuse in this library!

The sounds are divided into four sections, corresponding to folders on the CD-ROM. Probably the most usable section if you're hoping to spice up an existing track is the Single Sounds, where you
stand some chance of being able to find a one-shot blurp or zwee to fit. However, if you're starting
from scratch then the Metaphysical Loops and Drum Loops are likely to be the first ports of call. Both
these sections could provide the rhythmic basis for a track, but bpm values are unfortunately only
given for the latter (90-150bpm). Finally, the Esoteric Sequences section contains extended sound
collages which could be used on their own as sound effects beds, or else chopped up into a selection
of extra one-shot samples in the vein of the Single Sounds.

I liked this collection a lot, especially for adding aggression to more 'vanilla' productions, but I suspect that entire tracks built out of these sounds might constitute a breach of the peace! If your idea of
relaxation is stretching out on a bed of nails to the strains of Aphex Twin, then I'd guess that this
library will float your boat, but for most people's tastes Evolution will be a bit like Ribena - best used in
diluted form. However, given the keen UK pricing, you'll still be getting good value even if you only end
up using it in a supporting role. 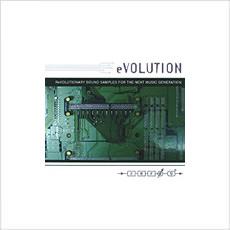