It seems unusual, but no-one has ever sampled a harmonica before. Finally there's one on
CD brought to us by Zero G.

The CD starts with a massive collection of more than 300, very well played riffs. These riffs are played within different styles, but the influence of blues is very strong. The only minor point to make at this section is the one called "James Brown". The loops themselves are good but as far as I can see it has nothing to do with the godfather of soul himself! The booklet keeps you on track with what tempo or key the riffs are played.

If there isn't any riff you like, or you think you can do better yourself, there's a sort of bonus section on the second CD which carries all the wav files. Here you'll find a bucketful of multisamples made with the same harmonica as used for the riffs. To make it much easier for soft-sampler users the instrument files for HALion and EXS samplers are included, all you need do is just 'load and play'. That way of playing is a bit different than with an ordinary keyboard patch, but it doesn't take much time to get used to it.

The recordings themselves are very clear and have plenty of dynamics. Sub noises - like the attack of playing the note - can be found here, but even so, you might surprise yourself with this CD. 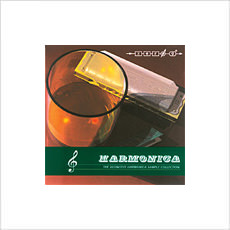