While the market is flooded with hip-hop and urban-groove collections, Big Fish Audio has been patiently setting the industry standard with its Vinylistics series (vols. 1,2 and 3) and genre-specific titles such as Strictly Hip Hop. For its next trick, Big Fish hired proven remixer Def Jef and his crack team of sampleheads to make yet another batch of rhyme-ready beat beds with their self-titled release, Kontrol Freaks. The concept here is a sort of ode to electro hip-hop, with occasional vinyl and acoustic tidbits mixed in. In terms of quality, Kontrol Freaks beats are simple, energetic and head-bobbing good. Some grooves will remind you of Def Jef's remix hits with talents such as TLC and Patti LaBelle, which you've heard a thousand times. Take the disc's first groove, "Gongo," which is an inspired but bafflingly simple MC treat. Other beauties, such as "Hefty Hef," will blow you back, as will the rumbling Brooklyn tribute, "Bed Stuy." Quicker grooves on the disc dabble in syncopated cross-stick patterns and additional percussion goodies. Each track begins with a drum loop; the construction (or full-band) loop follows, making it easy to audition only the beats. But the love doesn't stop there. Each cut also includes a hearty dose of one-shots, minifills and separate WAV files of all previously heard construction loops. If you're looking for the type of tight boom-bop that makes A&R types fold their arms and tip their heads back, it is time to get your freak on. 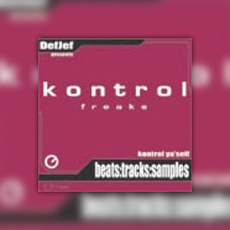