Celtic Instruments is a collection of 13 multisampled instruments supplied on two Giga-format CD-ROMs (which are compatible with HALion). While no manual is supplied, a tiny PDF file contains an instrument list with some brief tempo and key map details, but this doesn't explain the various articulations available for every instrument. Big Fish Audio told me that the forthcoming Akai version will include a proper manual, which users of the Giga version will receive free of charge.

The Celtic harp is considerably smaller than a classical concert harp, and the BFA library contains sustained and harmonic versions, along with a dozen assorted glissandi. At 230MB, it's the largest instrument in the collection, and apart from a few subtle changes in tone (at D#5 for instance), I was very impressed.

The button box accordion (aka melodeon) has a wonderfully rich sound, and immediately had me attempting sea shanties.

The 115MB fiddle includes several tones of sustained notes with fast and slow attack, marcato notes of various lengths, a selection of slides and turns, and plenty of bow and scrape. A 28MB steel-strung guitar in D (a great key for jigs and reels) includes vanilla, filtered and vibrato versions to blend more easily into an ensemble, and both this and the 4MB harmonica are basic but useful additions to the collection.

The wind instruments are presented in four formats: the standard versions only include those notes playable on the original instrument, CHR (chromatic) extends these so you can play in any key, while TU (tuned) accurately retunes them, and CHR TU does both. Most are also presented in various articulations permitting modwheel control of attack, level, filter, or vibrato, velocity or key switched attack or grace notes, along with separate collections of grace notes and rolls adding much more expression once you've got to grips with the control.

The Great Highland pipes provide us with the authentic martial skirl of Scottish bagpipes, complete with various chanter variations. Both the Scottish and Northumbrian small pipes have a more intimate sound, but the latter are unique in also having a stopped end, which gives them a rather different tone. The Uillian (or Uilleann -- Irish for 'elbow') pipes have additional regulators and a wider range, and all four instruments provide a great deal of character.

While the low whistle is only 7MB, it comes to life with some vibrato and grace notes added; while the penny whistle provides some expressive velocity-switched attacks.

The bodhran is represented by 48 hits, a set of 59 licks and flourishes, and two sets of 44 well-played loops with tempos ranging from 95 to 170bpm. Finally, Celtic Percussion contains marching tenor drum and pipe snare drum hits, licks, and rolls, along with spoons, clogs, and bones for that authentic atmosphere.

Overall, this library is good value and should provide a one-stop solution to anyone looking for a rounded Celtic experience. 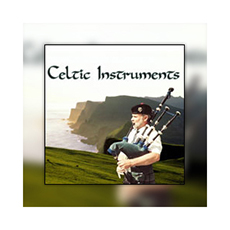