BANG FOR THE BUCK: 9

"The liner notes that accompany Planet of the Breaks are lively enough to make a corpse sit up and take notice: "[This CD] introduces a new generation of 'rawfunkindirtyassboogiebeats' to sample. Original loops that mix old-school style and sound with the sonic science of the new school. Drums recorded through vintage analog and tube gear, then digitized, sliced, diced, tweaked, and freaked. This ain't no ordinary sample set. This sh*t is dope!" And then the kicker, penned by drummer Shawn Lee: "I played practically every make of drum kit out there and recorded them at nearly 20 different studios in both London and Los Angeles."

Holy breakbeats! I'm doing the math, and, well ... Let's just say I have serious doubts that "practically every make of drum kit out there" would fit on a single audio CD. Exaggeration aside, how do these loops sound?

Just prior to starting this review, I finished a remix using the popular Breakbeat CD (reviewed Nov. '98). With those funky grooves in mind, I shoved Planet of the Breaks into the tray and started sampling. Right off the bat I was smiling. "The Skip" is a lo-fi, ringy loop that's wicked funky, and with a hilarious voice in the background shouting "Damn!" And the "Purdie Shuffle" might be one of the deepest ghost-note grooves I've ever heard on a sampling CD. Awesome. I'm starting to agree with the liner notes. This sh*t is dope, indeed.

Ernie Rideout agrees. "These loops are downright greazy, with a uniformly great feel that tends to hang back. The live sounds are nice and boomy."

Unlike Breakbeat, Planet of the Breaks doesn't have individual ReCycled slices following each loop. In fact, there's nothing construction kit-like about this CD. It's loops, and only loops. But with so many sample and software maniacs using ReCycle and the like these days, having pre-sliced pieces on audio CDs is becoming less of an issue. The loops on Planet are long, ranging from 16 bars to two minutes (!) in duration. Even so, I wish there was a bit more variety. Many times, the same two-bar phrase will repeat several times before a new element is introduced. And it would be great if every loop had at least one hat- and snare-only breakdown section. Most of the loops start big and stay big. "I wish the loops had all been played straight through," adds Ernie. "Many are 2-bar loops repeated."

Not all of the loops are static, though. Check out the way "Tribe Vibe" changes flavors: First you get a raw breakbeat with some background noise, then it mutates into a cool, chopped filter section, transforms into a noisy electro loop, and then returns to the original breakbeat but with a synth bass added.

While a majority of this material is based on live-played beats, not all of the loops are of flesh and blood. Drum machines and audio chopping/quantizing have been employed in some of the tracks, which I like. This old-meets-new school approach helps distinguish this CD from the pack. That said, Planet of the Breaks isn't what I'd call revolutionary, but this CD is at the top of its class. No doubt about it, Planet of the Breaks is a key buy winner, and a disc that I will be adding to my sample library". 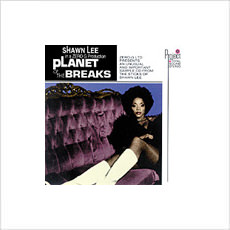