Sound On Sound誌（UK)レビュー内容（英語）
Freak Beats is what I call a no-nonsense sample CD. It does pretty much exactly what it says on the tin, insofar as it is a collection of 530 drum loops (plus a few highly usable vinyl scratching effects) grouped in blocks of 10 loops per track ID, each listed within a specific tempo range. There are no construction kits, no multi-samples or mix-out, just loads of interesting breakbeats that may lack flexibility, but more than make up for it with volume and variety. As is becoming the norm these days, you get an Audio CD and a CD-ROM containing all the loops stored as WAV files.

Starting out at 70bpm and moving up 5bpm at a time, the fastest loops appear at 105bpm, so you can see this is a fairly mellow and at times thoughtful collection of breakbeats. There is a strong electro and trip-hop feel to Freak Beats and it has a heavily retro vibe. In many ways it reminded me of the first Zero-G releases, namely the Datafile series where countless styles of drum loop were collected from all sorts of odd places, providing a mammoth and much loved resource for the would-be samplist looking for a quick fix. However, one of the most impressive things about the release is the range of styles and genres it manages to cover within a fairly tight tempo framework.

There are hints towards vintage '80s big beat indie sounds and some early Soul II Soul-type flavours, with bands like Kraftwerk even proving to be a major influence on more than a few tracks. As perhaps you might expect with any collection of loops that encompasses so much stylistic variation, the sound quality and nature of the drum sounds used also varies greatly from track to track. By turns lo-fi and gritty to magnificent, crystal-clear and very contemporary-sounding, a random flick through the tracks often feels like a comprehensive 'History of The Drum Loop Part I'.

The high degree of variation doesn't affect its usability a vast amount, because with so much material to choose from you are bound by the very law of averages to find something you like within two or three tracks at the very least. The scratching section tagged on the end of the disk (although it could be longer) is also a welcome inclusion, and you could argue that this is exactly the kind of thing every programmer should have on the shelf just in case...

So are there any downsides to Freak Beats? Sampling connoisseurs would perhaps be right in claiming that this is a release that concentrates far too much on the sounds of yesteryear, neglecting to say anything astoundingly original about rhythm in the 21st century, but the view I favour is that its non-pretentious 'just the drum loops' attitude makes it exactly the sort of studio tool that the vast majority of programmers and producers would be happy (if not delighted) to have in their collection. 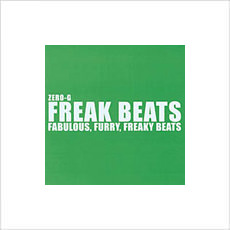