This DVD is another new title in Loopmasters' forward-looking Artist Series, and features the talents of Dave Wallace, Kieron Bailey and Brent Newitt (otherwise known as Aquasky), who have been stirring up the breaks scene on both sides of the Atlantic, not only with their own tunes, but also via their independent label (Passenger Records) and through collaborations with people like the Ragga Twins and Friction. What you get here is a selection of evergreen samples from their work during the past decade, as well as a load of bang-up-to-date, newly-created material.

The heart of the sound set is 360MB of drum, synth, and vocal loops, but this is supplemented with a further 300MB of special-effects one-shots, single drum hits and synth multisamples. As with other titles I've looked at in this range, this doesn't add up to the 'more than 1.5GB of material' billed on the DVD packaging, as Loopmasters appear to have taken the liberty of including all the multi-format duplicate samples in their calculations. However, the library's 16-bit sample resolution and wide-ranging archive of meticulously categorised synth multisamples means that it can still deliver serious value at its fairly slimline price.

What struck me most forcibly about these samples is the rich and in-your-face sound design, and I'd recommend it to anyone seeking inspirational synthetic sounds. There's lots of grit and power to both the bass and synth sounds, but not without some tongue-in-cheek '80s cheese and arcade-game influences that give the whole production a great playful feel - pretty much in keeping with the DVD cover art, in fact. Effects are as creatively abused as you'd hope, but the well-judged reverb, delay, and particularly modulation effects help give an unusually wide-screen sound that sets Aquasky's material a little apart from the herd.

What lets the library down slightly for me, though, is that the actual musical material doesn't quite live up to the sound design. The drums are a case in point: they certainly pack a steely punch and drive the groove along efficiently, but despite a few occasional sparks of frenetic stuttering brilliance, the programming just seems a bit short on flair. Some of the bass and instrument parts also sound rather 'one finger and an arpeggiator', which left me a bit underwhelmed once familiarity had taken the edge off the sonic first impressions. And those few samples that go more out on a limb mostly seem to end up outside the realms of realistic usability.

In my experience, dance-style vocal samples almost always seem emotionally bankrupt, either because of over-knowing attempts at titillation or cringe-inducing clich*s, and although Rebecca Riley's contributions here are better than some specimens I've heard, she does still fall into both these traps with some frequency. The Ragga Twins (Demon Rockers and Flinty Badman), on the other hand, are bundles of fun, with their cocksure delivery and slightly mashed vocal sound seemingly bearing the mark of too much fast living. All in all, then, Aquasky is a good place to go if you've already got enough musical ideas to be going on with but find yourself short of meaty and inspirational sounds. 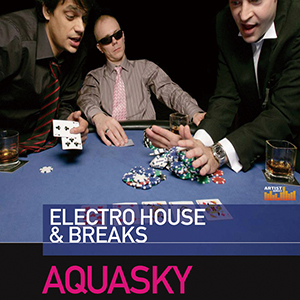