Sound On Sound誌（UK)レビュー内容（英語）
Ian Boddy has been involved in the experimental electronic music scene for 25 years, and SOS readers will doubtless be familiar with some of his virtual instrument creations, such as Outer Limits, Morphology, and ASL/ Elektrolytic, one of the latest offerings in Zero G’s budget-friendly SoundSense series, comprises 480MB of 24-bit content in Acidised WAV, Apple Loops, Stylus RMX and REX2 formats.

This library includes some seriously experimental material, marrying Boddy’s characteristic analogue synth sounds with a range of creative digital manipulations. The 400 samples are organised into separate folders of one-shots and loops, but although there’s been an attempt to structure things further, with seven subfolders, the distinctions between them seem so fuzzy, to me, as to be of little practical use. Neither are the sample file names themselves: if you think you can guess what the files ‘Schwip’, ‘Snurd’ and ‘Twing’ sound like, and you guess anything like I did, you’ll be wrong! The only really useful bit of information provided is the tempo of each loop, and overall using this library is an exercise in serendipity, whether that suits the way you work or not.

In stark contrast with the lack of imagination displayed in organising Elektrolytic, the sound design itself is full of flair, with the loops being the star of the show. However interesting individual electronic sounds are on their own, the really tricky thing is putting them together in a musically sensitive and inspiring way, and Boddy brings an experienced virtuoso touch to the proceedings here. Every synth modulation and effect you can name is used, abused, turned inside out, and shaken until the digits rattle against each other, yet somehow the assembled schwips, snurds, and twings coalesce into something that lives and breathes - and probably terrorises the cat into the bargain. Thankfully, he also avoids offering straight rhythms only (a hallmark of many second-rate 'inspirational' loop libraries). In fact, some of the most appealing material in the collection emerges when a bit of swing or off-kilter rhythm gets mixed in, despite this being so difficult to pull off successfully in electronica.

Another nice thing is that the samples as a whole, and the loops in particular, are often really punchy - particularly the kick-drum sounds, which often exhibit a really nice, tough edge. There's lots of low end in the mix too, on occasion, and bags of stereo interest, with good use of tempo-sync'ed delay effects to give a nice swirling complexity.

Although the audio is often shot through with intentional digital nasties (including rich seams of aliasing, clipping, and scrunching bit-reduction), what really sets this library apart from something like, say, Soniccouture's Abstrakt Breaks, is the way the analogue synth elements lend an appealing subliminal vintage tinge to the sound, reminiscent of an episode of Shatner-era Star Trek, or Goldfrapp's retro-electronic album Black Cherry. If you can exploit this flavour in your music (as some IDM and urban producers are doing very effectively), this collection will offer you something that you’re unlikely to find elsewhere at the price. However, more mainstream users may find this material just a little too off-the-wall and ineffectively organised to justify a speculative purchase, even at this price. 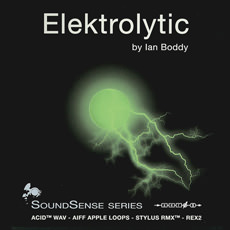