Zero-G´s The Big Reason certainly lives up to its name: with well over 6000 individual samples, occupying 4GB of hard disk space, it certainly is big. This is somewhat less surprising when you realise that The Big Reason actually consists of seven individual libraries, all developed for Zero-G by different producers but sold as a single product. Interestingly, while the various instruments and loops are presented in formats suitable for use with NN19, NNXT, Malstrom, Subtractor and Dr:Rex (amongst others), they are not packed into Refills, so the samples themselves would be available to non-Reason users. That said, I ploughed through the considerable content via Reason v3.0.4 (armed with emergency supplies and a stiff drink). Here we go....

First up is Binary Finary, the bulk of which consists of instrument patches and REX2 drum loops. The instrument sounds include NNXT, Malstrom and Subtractor patches covering dance or techno style sounds. There is probably not anything radically new amongst this lot but there is plenty of material to get your teeth into and I particularly like the range of bass sounds: some simple and solid, others more extreme. However, things do get a little more interesting amongst the REX2 loops, including various mixtures of ethnic percussion and processed Nine Inch Nails-style drum loops, although there is also plenty of dance-orientated material: a rather eclectic mix but interesting and fun nevertheless.

Chemical Comedown provides 2GB of NN19 sampler patches organised into two types. The ´Pads & Themes´ section provides a huge collection of evolving pads with some more obviously melodic timbres, while the ´Sound FX´ section contains textures more akin to sound design. Like the pads, many of these are also evolving sounds and the atmosphere can get pretty creepy at times. I could easily imagine the material in this library getting used in a horror or sci-fi film score.

G-Funk Era provides a range of Subtractor, Malstrom, NNXT and NN19 patches that are similar in territory to those of Binary Finary. However, there are a few more melodic sounds, such as a small number of Subtractor-based electric pianos. However, the highlight of this library is the collection of REX2 files containing drums, guitar, bass, scratching and percussion. There is a funky, dance-orientated feel to much of the material (think Fat Boy Slim) with a dash of trip-hop thrown in for good measure. The collection also includes a number of ´mini´ construction kits - that is, loops that are obviously intended to be easily put together to create a basic song section.

The Guitar Lab library provides an eclectic collection of guitar riffs and chord progressions in REX2 format. The styles cover blues, jazz, rock, funk, folk and a whole lot more. Both the playing and recording quality are very good, and if your guitar chops are not as strong as you might like there is plenty here to help out. While there are a few loops that are obviously related, this is not really a construction kit library and, in the main, I would think these loops might be most easily used to provide an instrumental ´hook´ within a track - perhaps not something for everyday use, but well worth dipping into for the occasional bit of inspiration.

Organic Chemistry provides a rather left-field collection of electronica and exotic loops set up for use within Dr:Rex, NNXT and NN19. There is some really interesting material in this library, including some heavily-processed loops based upon ethnic instruments, such as bagpipes and kalimba. There are also plenty of processed drum patterns, using both acoustic and electronic kits. Again, there are lots of beats that would work in NIN-style pieces.

The final two libraries, Percolated Beats and Planet Bliss Loops, both provide collections of drum loops ranging in tempo from 70 to 170 bpm. Percolated Beats would suit R&B, hip-hop, funk, electronica and associated styles. The drums are mainly acoustic and the loops feature some nice, and occasionally quite intricate, playing. While some loops do feature processing, this is mostly a little room ambience and it is therefore very easy to mix and match the loops. Planet Bliss Loops is more directly aimed at dance styles (techno, electronica, hip-hop and R&B) and the sounds are more electronic in nature. In some cases EQ or filtering has been applied, but there are usually small groups of related loops with which to build a drum track. The playing may be a little less adventurous than Percolated Beats but there is still plenty of useful material.

Overall, The Big Reason is a little hard to classify. While the libraries are all useful in their own right, they do make a rather strange set of bedfellows in a single package. On the down side, none of these libraries is perhaps overly original and shouts out ´must have´, and I´m tempted to speculate that this might be why Zero-G have bundled them together in this way. On the up side, at this price each library works out at just over ￡10 and they certainly represent excellent value for money. For those working in dance or electronica styles who want a shed-load of content without parting with a shed-load of money, The Big Reason is well worth considering. In summary, three stars for originality but five stars for value for money: that´ll be a four then. 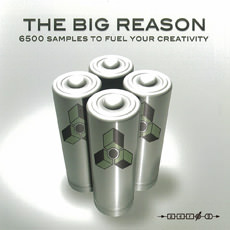