"As suggested by the library title, this instrument has a historical element to it. Sound designer Steve Howell has applied his extensive knowledge and experience with the world of electronic instruments to produce a Kompakt instrument with some 1300 patches covering the last 40 years of classic and quirky synths, samplers, drum machines, and pianos - and he's also included a few toys for good measure! Lots of details of the instruments sampled can be found on Steve's site at www.hollowsun.com/vintage/nostalgia.html.

Given the huge number of individual instrument patches, even auditioning the library is a fairly major task. Thankfully, the instruments are organised into some sensible categories within Kompakt. However, what really made auditioning the huge number of instruments much less of a chore was that there are some truly wonderful sounds! For example, as the former owner of a Juno 6, the various Juno-based patches within the Japanese Classics category made me want to kick myself all over again for ever having sold that particular synth! The same category also includes a large number of SH101, D50, and DX7 sounds ? The patches from the latter two creating an instant '80s pop vibe.

For more of a '90s feel, the various 'dance' patches within the European Classics category (created with a Novation K-Station) have 'rave' written all over them, and there are a good number of bass patches that complement them perfectly. This category also includes some PPG patches, and my particular favourites amongst these were the two 'film pads' and the various filter-swept patches, all of which are very atmospheric.

Both the Organs and the Electro-Mechanicals categories contain samples of some real classics. The former provides very useable B3, Farfisa, and Vox Continental sounds, while the latter category includes patches from a Clavinet D6, Fender Rhodes, Yamaha CP70, and Wurlitzer. For a dose of evolving pad sounds, the Digital Rompler synths category is well equipped. Amongst sounds derived from the Prophet 5, Ensoniq SQ80, and Yamaha SY85 are a selection of pads from the Yamaha CS1X and FS1R. Whether it is floating new-age backings or deep and dark sci-fi horror textures that you need, there is something here that will fit the bill. The SQ80 bass patches are also very good.

The Vintage Samplers category is actually dominated by sounds from the Fairlight. There are some classic sounds here that must have appeared on a large number of hit records during the 1980s, including those of Peter Gabriel and Trevor Horn - The Orch 5 patch is probably the classic 'orchestral hit' sample. Slightly more esoteric are the sounds within the Cheap N Cheezy and Obscure Synths categories. The obvious highlight here is the Stylophone (provided both with and without vibrato). For those of a certain age, I'm sure this will conjure up images of a certain Rolf Harris TV advert - so naff it's almost cool!

Three categories of drum-machine sounds are provided; Drum Synths, Classic Beatboxes, and Obscure Beatboxes. The Drum Synths include Pearl DRX1 and Syncussion, Simmons, Synsonic, and Roland TD7 sounds. These all sound wonderfully dated, but in the right context this might be just what is required. The Classic Beatboxes category includes sounds from all the usual suspects - the whole TR series is represented, as are the Linndrum, RX11, Korg DDD1, and Alesis HR16 and HR16B. While the original units span a considerable period of time, many of these classic devices are still in very wide use, and there are plenty of sounds amongst this lot that would work in many current music styles, particularly dance or hip-hop/urban productions. Many of the Obscure Beatboxes live up to their name, although there is also a collection of samples from the Alesis SR16 here, and these are certainly very useable.

The final four categories are themed by the style of sound, rather than by the particular synth or sampler used: Sci-Fi, Atmosferics (yes, that's how it's spelt), String Synths, and Basses. The first two of these contain plenty of soundtrack fodder ? Add your own Theremin and you are instantly in '50's sci-fi B-movie territory. The Synth Strings collection covers a wide range of different string-style sounds (from obviously synthetic through to more realistic) and is based, amongst others, on the ARP String Ensemble, Crumar Multiman, and Roland Jupiter 6. The Basses category is dominated by a large number of very familiar Roland TB303 sounds, but also includes some excellent ARP2600 patches. While many of these sounds will create a nostalgic vibe, they would fit equally well in some current musical contexts. Overall, the themed nature of these last four groups works very well, making browsing for a suitable sound very easy.

As you might have guessed, I think Nostalgia is excellent. Zero G and Steve Howell should be congratulated for putting together such a large number of 'classic' sounds in a single, very affordable library. I had no problems creating complete instrumental pieces using just the sounds within Nostalgia. What's more, unlike some Kompakt-based libraries, this one does make very good use of Kompakt's own processing options to add further colour and movement to many of the sounds. True, some of these sounds can be found with more comprehensive multisampling in other libraries, but what is here sounds consistently good, the samples are well programmed, and, unlike some sampled instruments, the instrument will not put a huge demand on the host computer.

If you like the sounds of classic synths and drum machines, but, like me, could never afford to buy even a modest selection of the electronic instruments represented here, then this library is an excellent way to get a flavour of the sounds without breaking the bank. For sheer fun and 'bang for buck', Nostalgia is certainly worth five stars, and I'd probably give it more if I could!" 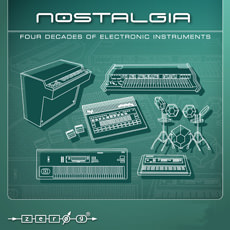