"Zero G's latest Intakt-based sample library contains over 1.2GB of material on a single DVD-ROM. Sample libraries with an Intakt front end will now be familiar to regular SOS readers, but those requiring some background should check out earlier reviews from the SOS June 2004 and February 2005 issues. As suggested by the title, this is a library of vocal samples, but there is something of a twist. Unlike the majority of vocal libraries that tend to be dominated by playable 'oohs' and 'aahs' or short sung phrases in particular styles, Vocal Forge provides complete vocal performances, including lead vocals, doubles, backing vocals, and various ad libs.

The format of the library is similar to a construction kit. The majority of the samples are organised into 14 kits, each of which contains the vocal samples for an individual song. Within each kit, the samples are arranged into a number of different Intakt programs, each containing a different element of the vocal performance, such as a verse, chorus, backing vocal, or ad lib. Each program then contains several samples ? The majority using Intakt's Time Machine mode to provide Acid-like tempo-matching to the host sequencer ? And these samples might represent different lines from a verse, doubles within a chorus, or, in some of the kits, processed versions of the vocal line. For convenience, Zero G also include a 'whole song' programme that contains all the key samples in a single program. This is useful for both auditioning and initial arranging.

A further set of Toolkit programs are provided, and these include all sorts of weird and wonderful vocal snippets. There are choral samples, operatic phrases, hip-hop shouts, vocal percussion, heavily processed vocals, and even a few mock TV sports commentator samples. It is a bit of a mixed bag, but there is some good fun to be had here if you're looking for some vocal ornaments to add to a track.

In terms of musical styles, the main vocal kits are dominated by R&B, dance, and pop singers ? Both male and female - with original tempos between 80bpm and 140bpm. The feel is definitely urban, and the performances themselves are generally good with plenty of character. The ability to arrange the lead vocals and to add appropriate backing vocals or ad libs to your arrangement makes each 'kit' quite flexible. On the downside, while the tempo can easily be adjusted, you are constrained by both the lyrical content and, unless you have access to software such as Melodyne, the melodic content of the original recordings.

With only 14 kits to play with, there will only be so many songs an individual user might be able to construct. My main concern with Vocal Forge, therefore, is its longevity. With an instrument-based construction kit, the elements can always be blended in with samples from other libraries. Vocal lines, however, are always going to stand out in an arrangement, and will contain the same lyrical and melodic base regardless of who constructs the song. Working with Vocal Forge is more like a remix task than creating a song from scratch. This limitation aside, Zero G have produced an interesting take on the vocal sample library, and Vocal Forge certainly ought to be of interest to budding urban music producers or remixers without access to professional singers." 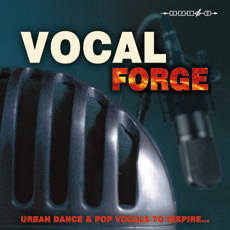