Polyester Loops is two CDs of man-made loops and drum kits that contain nothing that could be described as easy on the ear. It is, however, a phenomenal library that will bring organic sounds from the cutting edge of creative digital music to your samples collection.

The first CD contains 20 drum kits and loops in both .WAV and REX formats. The drum kits include a wonderfully wide variety of sounds, from clicks and pops to heavily distorted snares and deep resonant kick drums, all of which have been put to great use on the drum loops. As well as drum loops, the MachineWashed Loops folder includes synth loops from producer Jerzy Korzen’s favourite soft-synths, mashed with a collection of heavy-duty effects.

The second CD includes more heavily processed drum and synth loops as well as a ReFill, which includes five new Combinator patches designed for getting the most from the REX files included on the two CDs.

If you are looking for another library of warm, analogue synth loops and retro cool, this library is probably not going to appeal. But if you are looking to create cutting-edge tracks with only scant acknowledgement of the past, this is the sample library for you.

Purist fans of glitch music may disapprove of a sample library that puts these sounds under the control of the producer, preferring the more random approach of the early glitch electronica artists. But with artists such as Kid 606 and Aphex Twin influencing the mainstream through bands such as Radiohead and Muse, it would seem that Loopmasters has jumped on the burgeoning glitch-sound bandwagon at exactly the right time.

"A wild ride on the dirtier, edgier side of electronic music. Polyester Loops is the sound of computers pushed to the extreme!" 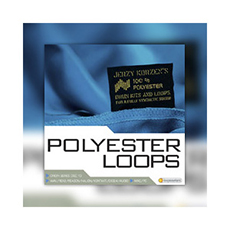