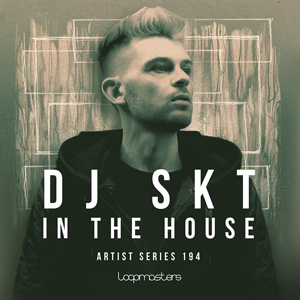 With a whopping 35 million Spotify plays, and releases across the world's biggest and best labels, such as Defected, Ministry of Sound, 3Beat/Universal, Toolroom, Columbia, Atlantic, Big Beat, Armada, New State, S.K.T is a house music sensation. There are not many house producers who have been able to enjoy a long and successful association with so many leading imprints consistently throughout their career.

On 'In the House', for the first time ever, DJ S.K.T breaks down his production process with this 698 MB sample pack covering everything from deep, tech to minimal house. Infective drum grooves, deep sub bass, classic house organ sounds, elevating synth hooks, rolling tops, SFX, booming kicks, snappy snares and much more are all included! With loops rolling between 122-128bpm, you'll find something for your house, tech house, minimal house and nu-disco tracks, alongside any other dancefloor music you're working on.

As the man himself says: "It's always been crucial to me, that my productions always sound fresh as possible, not just so they stand out from the crowd, but that they also stand the test of time. I had the idea of creating this sample pack as I'm constantly asked by people about the sounds, and samples, I use to create my tracks. So, I decided to go back through my old computers, and hard-drives, and catalogue the collections of sounds I have designed over the last seven years, alongside much more recent drum tracks and top loop patterns. I'm excited to share with you all, my first ever sample pack, and I hope everyone enjoys it as much I loved putting it together".