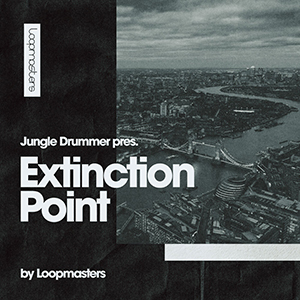 Loopmasters once again team up with the awesome Jungle Drummer - this time with guest features from his band Extinction Point bringing you an exceptional musical selection, punctuated by the usual display of tearing breaks and grooving fills. Everything within is 100% royalty free as standard from Loopmasters.

The Jungle Drummer is a dominant figure on the club and festival circuit all over the world, with live performances and DJ shows encompassing a variety of styles and genres. He has performed with award-winning Drum and Bass act London Elektricity and has worked and performed with other artists such as Rodney P and Killa Kela, Coldcut, Radiohead producer Nigel Goldrich, Raw Hill Cru, DJ Fresh, Shy FX, A Guy Called Gerald, DJ FU, DJ Craze and The Scratch Perverts to name but a few.

His new musical project is Extinction Point, in which he produced and played the drums on the first EP London Wake Up. The result is a blend of Jazz improvisation with the sonic experimentation of the golden era of British Electronica set to a backdrop of solid Funk, Soul and Jungle breakbeat grooves. The themes of the music address the everyday struggles of life in 21st century society.

Over the course of 892 MB, the Jungle Drummer takes us through the key features of the Extinction Point sound. A clear passion for rhythm takes precedence as the central focus of the pack, with full live drum breaks in a wide array of tempos keeping you more than covered for beats. A massive range of bass loops will keep your foundations rocking solid, with a great amount of choice for both electric and upright bass workouts.

Once you’ve laid down your rhythm section, you’ll find a great deal of key jazz improvisations to layer on top of it. Suave horn riffs, gorgeous strings, flute licks and electric guitars will be of maximum service to your musical craft. In a range of keys and at tempos between 81-175bpm, this collection will work great with hip-hop, nu-jazz, neo-soul, deep house, jungle, drum & bass and many more!