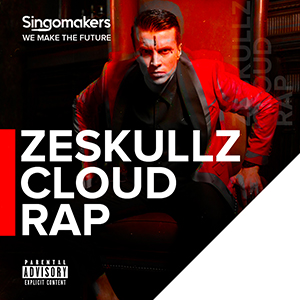 Zeskullz’s track "Watch Me" been awarded as ≪Best Dance Vocal 2017 by Billboard USA≫ and reached Top 50 Dance chart of Billboard USA, currently it's #24 alongside with Drake, Dj Snake, Diplo and more. Also several Zeskullz tracks been used as soundtracks for movies and TV series, including USA Network's "Queen of the South≫ - selected personally by Giorgio Moroder and his track ≪Rocksteady≫ used for Les Mills Wellness TV show. Zeskullz’s tracks been included to rotation on BBC1, Sirius XM, Europa Plus and more.

Also Zeskullz is a founder and ideologist of HUMAN3000 "Worldwide Wellness Community".

Check this sick demo of ≪Zeskullz Cloud Rap≫ and grab your copy A$AP!
（From  SINGOMAKERS）