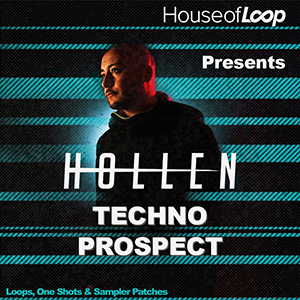 If You are searching to make music like DJ Hollen, then here is your pack. The name Hollen is well-known among Techno and Tech House lovers and clubbers. He is quite versatile with the ability to do his "Groovy tech house" and "Peak Time Techno," while he still has his own trademark sound for which he is famous for.

In this artist's case, there is not a clear starting point for his career as he was seemingly always interested and supporting House and Techno music.

Federico Aniello / Hollen did begin with music due to it being fun and supported events near Scafati, Italy. His seeing Turntable Legends live is a standout event. He started off in small clubs and from there started his own shows. Hollen became noticed in the music scene around 2008. Some of the artists that Hollen has worked with, are: 100% Pure, Agile, Bitten, Deeperfect, Driving forces, Form Music, Glasgow Underground, Intacto, Kling Klong, Loose records, Pornographic, Saved, Suara, Terminal M, Toolroom, Transmit, and Tronic, etc. However, his most well-known collaborations or the peak of his current career are with: Pirupa, Stefano Noferini, and Uto Karem. In terms of his remixes, his biggest so far are: Alberto Ruiz + Pig & Dan, Cuartero, Dj Chus, Felix Krocher, and German Brigante.

Here is a quote from Mr. Hollen describing what he says is a dj's main job, “It’s just a short step from making music to DJ but you need a different viewing of the music since the producer creates and plays with the sounds, the DJ should simply let your ass shake.” DJ Hollen's influence or distinct "Techno Made In Italy sound" has reached out to festivals and venues in the world, such as: Argentina's, Bahrein; Brazil's, Clash Club; Bulgaria's Cacao Beach; Canada's, Coda; Colombia's, On Beat and Living Entertainment Festivals; Costa Rica's, Club Vertigo; Holland's festivals: Air and Lief; Dockyard, and Mystic Garden; Italy's, International Talent and Rashomon; Mexico's, Dream Festival, Novilunio, and Time & Space Festival; South Africa's, Club Era and Twilight Festivals; The U.K.'s Egg & Ministry of Sound; The United State's: Clevelander, Robot Ears, and Space. However, he also has influence in: Dubai, India, Indonesia, and Japan. 2011 saw his collaboration with long-time friend, Tony Dee. Also, the Prospect Records label that seeks to support up-coming and fresh talents. As, of today, the label is very active with release parties and releases. Much like the label this pack is jam packed with content, such as:

20 bumping bass hits, clap shots, crisp hi-hat shots, iconic snare hits, percent shots, rhythmic synth shots, and thumping kick shots,
24 textured sounds
30 dancing drum loops at 125 bpm that are further subdivided into drum parts with: full, percussion, and no kick drums
30 more drums subdivided the same, but in 126 bpm
30 deep bass loops at 125 and 30 at 126 bpm
30 pads
30 synth loops at 125 and 30 at 126bpm
30 Efx samples
46 exs24, kontakt, and NN XT sampler patches
6 battery sampler patches
A lot can be said of Hollen, but he described his view on his music, along the lines of: “I don’t like to talk about genres, I love the music in ALL its facet and it is always in a constant evolution.”

If you want to evolve your music into the Italian Techno, there is no better place to start than with this, Prospect.
（From  HOUSE OF LOOP）