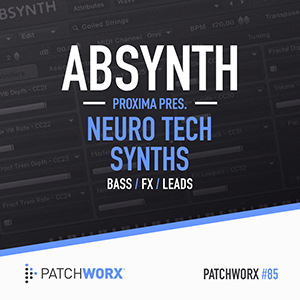 Patchworx 85 - Proxima presents Neuro Tech Synths is a deeply dirty collection of sounds for Native Instruments gloriously versatile VST, Absynth. This unique pack is primed for sonic Neuro battles with Bass, Beats, Leads, Pads and FX direct from the upcoming king of noise: Proxima!
Proxima is certainly taking no prisoners! His aim is to merge the DnB environment with the space of Dubstep, and this original approach has been picked up by the likes of Hospital Records, Shogun Audio, Blackout Music, Neodigital and Plasma Audio amongst others. In 2011, he focused his attention to Dubstep, followed by his critically acclaimed debut album APLHA in 2014. In 2015 he returned to DnB, stronger than ever - and he hasn’t looked back, with top 5’s on Beatport - Proxima continues to raise the bar.
Proxima presents Neuro Tech Synths gives you 64 Presets for Absynth, tweaked and toned for an onslaught of epic proportions ? with pounding bass, slick beats, searing leads, killer fx and spacey pads. In addition to the presets you’ll receive 64 MIDI loops to sequence the presets, and their accompanying combination bounced out as WAVs.
This pack has everything you could want to build a killer track, make sure to add this to your cart and get cracking! Proxima says “This sample pack has been so much fun to make! Getting in the studio and crafting these sounds, has been a riot. And just wait till you hear those basses!”
In Detail: 64 Absynth Presets, 64 MIDI Files, 64 Wav Loops (taken from the MIDI and Presets) presets include 15 Bass Presets, 11 Drum Presets, 11 SFX Presets, 15 Lead Presets, 12 Pad Presets.
The Patchworx series are brought to you by Loopmasters, and are a creative resource for producers who are looking to produce and perform their own musical parts, using genre specific sounds which have been designed by experts in their genre.
Patchworx titles will be released often, for a variety of the most popular soft synths ? check back for new releases! Instructions are included for a stress-free install, with support available.
Create, Inspire and Perform with Patchworx - sound ammunition for your next production!
NOTE: The presets come as NI Absynth preset files so please ensure you have the latest version before ordering.
www.facebook.com/proximamusic
www.twitter.com/nlproxima
www.soundcloud.com/proxima-music
www.instagram.com/proxima_music