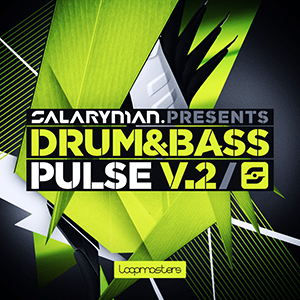 Loopmasters present Salaryman Drum & Bass Pulse 2 - a rolling collection of royalty-free Drum and Bass samples with influences from every shade of the musical spectrum. Never confined by conformity, Salaryman brings you smooth liquid elements, alongside techy Basslines, Melodic riffs and clean cut Beats.
Salaryman has risen to fame over the last decade, establishing himself as one of the key Drum and Bass producers in Europe. Starting out behind the decks, he has played alongside some of the biggest industry names including DJ Hype, Pendulum, DJ Fresh and Shy FX. In 2006 he entered the world of production, making sure his aim stays the same: develop his own approach to Drum & Bass by blending elements of genres influential to himself - Trance, Hip Hop, Reggae, Trip Hop & Jazz.
With a plethora of releases under his belt on worldwide-known labels such as Imprint, Fokuz, Citrus and Celsius. In 2014 he released his first record for Ram Records - alongside bass music heavyweights such as Sub Focus, Chase & Status and Wilkinson, His tracks are now supported by the biggest names in the scene, frequently aired on national radio and reaching the Drum and Bass top seller charts.
Following on from his first collection Drum & Bass Pulse - Salaryman brings you a diverse mix of expertly produced elements to give your Drum and Bass a crisp, fresh energy. Close-Cut Breakbeats and Percussion will bring an edge to the rhythm, while Melodic leads Loops combine with rolling Bass to bring up the goose bumps. A wealth of Multi-Sampled Instruments put some epic bass and Synth sounds in the palm of your keyboard hands.
In detail expect to find 2.83 Gb of content including a whopping 818 24Bit Wav files including: 265 Loops - 50 Bass Loops, 81 Drum Loops, 70 Music Loops, 37 Perc Loops, 13 Atmosphere Loops and 14 Drum Fills. Then 553 Single Hits - including 60 Drum Hits [5 Crash, 14 Hats, 12 Kicks, 5 Rides, 20 Snares and 4 Toms], 27 Bass Hits, 24 Synth Hits, 31 and FX hits. 23 Bass and 12 Multi-Sampled Instruments are included, putting the original Synths at your fingertips. 265 Apple Loops are contained, as are 310 Rex2 Loops. A total of 102 Software Sampler Patches are included and formatted for all major formats including NNXT, Halion, Sfz, Kontakt and Esx24.
With DJ support from Andy C, Grooverider, Adam F, S.P.Y, High Contrast, London Elektricity, Spectrasoul, John B, Concord Dawn, Shimon, Optical and Lung, Salaryman 2 is sure to bring the vibes to your studio productions. Listen to the demos above and Download the FREE Taster Pack today!