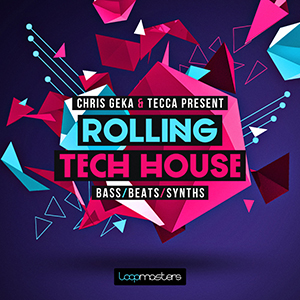 Loopmasters proudly present a brand new hot collection of Royalty Free Tech House samples produced exclusively by Chris Geka and Tecca featuring over 500Mb of Deep Rolling Beats, Bass and Melodies aimed squarely at the Mainroom dancefloors throughout the world.
After working together on many productions and remixes Chris Geka & Tecca come together for their first sample collection with “Rolling Tech House" a powerful collection of Driving Basslines, Tribal Beats, Funky Percussion and Tech Melodies.
The Collection is also bundled with 255 One Shot Samples including Bass, Drums, Percussion, Synths and Stabs plus some extra special spoken vocal samples recorded in Spanish by Corina Morera.
CHRIS GEKA is an agitator of the French & international electronic scene. Formerly known as The Henchmen, his productions & remixes have been signed to some of the most prestigious labels including Nervous Records, KMS Records, Area 94, Tactical Records and Pacha Records. His steady stream of remixes and productions have been supported by the likes of Roger Sanchez, Chuckie, Nicky Romero, Wolfgang Gartner, and UMEK and are constantly ranked in the Beatport and Traxsource Top10s. His Energetic DJ sets traverse House, Tech House and Techno and always cause maximum dancefloor impact whatever the venue.
TECCA began his career in the mid-90s with residences at Chic & Cream (in summer) and La Romana (winter). His International DJ sets have taken him around the world from New York to London to Tokyo and beyond touring under the name “Lost in Tribal". Tecca loves to fuse Latino, African Tribal, Jazz, Bossa Nova, R&B and his passion for strong driving rhythms can be heard in his signature productions which have been released on labels such as Moonshake, Aenaria, Housesession, Influential, Totem and Many More, a talent to be reckoned with Tecca knows what will work immediately and his infectious grooves have torn up many a dancefloor across the globe.
In Detail expect to find 557Mb of 24Bit 44.1 KHz sounds and Loops including 58 Bass Loops, 61 Drum Loops, 23 Kick Loops, 31 Music Loops, 55 Percussion Loops, 36 Bass Hits, 103 Drum Shots, 20 SFX Sounds, 33 Spoken Vocal Phrases, 228 Rex2 Files and 109 Soft Sampler Patches for Kontakt, Halion, Exs24, Nnxt and Sfz formats.
The Collection is also available to purchase in Apple Loops, Ableton Live Pack and Reason Refill formats (Sold Seperately)
If you are looking for an inspirational collection of Deep Tribal Tech House then look no further, press play on the demo track and test drive the free taster samples then get ready to sample Chris Geka & Tecca ? Rolling Tech House TODAY!