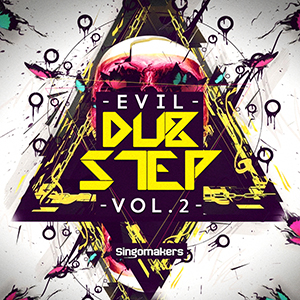 Something totally Insane comes this way, as Singomakers drop the atomic bomb with the most exciting and desired Evil Dubstep sounds from within the ever evolving Dubstep scene!

Evil Dubstep Vol 2 is the sequel of Singomakers bestselling dubstep product ever! Inspired by highly reputable dubstep producers like Skrillex, Nero, Noisia, Kill The Noise, X-Kore, Flux Pavilon, Datsik and so on.

The sounds featured in this pack have been spawned using complex FM algorithms and technical synth wizardry of Damasko - award winning Singomakers producer and artist of such TOP labels like Global Underground, Black Hole Recordings, Perfecto, Baroque, with regular support from Top djs around the globe!

Suitable for all producers of Dubstep, Drum and Bass, Complextro, Drumstep, Modern EDM and Grindcore, Evil Dubstep is the must have collection for today's cutting edge producers.

Prepare to scream as we open the gates of hell and unleash the most terrifying bass sounds known to man or beast!
（From  SINGOMAKERS）