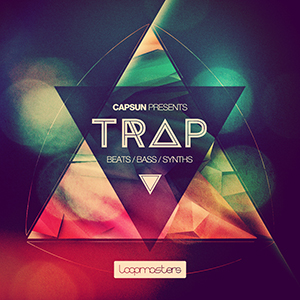 Built from the ground up CAPSUN has ensured this collection is all Killer and no Filler, with each sound perfectly tuned and club tested to ensure they will rock the foundations of any building you choose to let them off in. The Subs are Huge, the Drums are Fat and the synths are Sharp, make no mistake these samples will tear up a room quicker than a flock of bulldozers...

Whilst growing up and studying Music Production & Live Recording in London he immersed himself in the rich bass music culture and burgeoning Garage, Jungle & Hip-Hop scenes. Pirate radio and the London club scene were huge influences in his early music and he now DJs across the UK and holds residencies as the leading ambassador of Trap, Rap & Bass music in the South East.

CAPSUN has been producing and writing music for over 10 years under a number of aliases spanning various bass-heavy genres. He has worked with and produced for artists across the UK and internationally including Wretch 32, Scorcher, Ghetto (Ghettz), Bigz, Sway, True Tiger and many many more. More recently he has released music with renowned bass music label Demon Dub Records, featured on leading dance music site ClubTapes.com, gained support from leading blogs and has released artist approved remixes for Slander, DrDr, IYES and TTB amongst others.

With an ever evolving sound in more recent years, he has become involved in the fast growing Trap music movement. With a prolific output of remixes, bootlegs and original music and close alliances with Trapstyle.com & Trapstyle UK, CAPSUN is in high demand for his signature style and studio production skills.