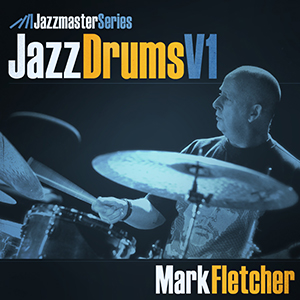 We launch the series with an incredible collection of Jazz Drums courtesy of Mark Fletcher whose enviable rhythmic performances prove he can he swing with the best of them, and indeed the musicality Mark expresses when playing the drum kit has to be heard to be believed, with everything from musical tom flurry's, intricate brush work to subtle cymbal embellishments, Mark Fletcher is the man to call when you need something a little special for a session.

Mark Fletcher's CV reads a bit like a modern jazz lover's record shelf. From Ronnie Scott and Pete King, Hatfield and The North and Gary Husband to the final line-up of Soft Machine to feature Elton Dean and Hugh Hopper, if you know their names Mark Fletcher has probably played with them. Fletcher's style is deeply aggressive whilst rock solid whether swinging, grooving or dancing round odd metres. He is equally comfortable playing a manic Cobham style solo, a steady shuffle or even delving into Elvin Jones or Tony Williams territory. And if you don't think brushes can be played loud just come to one of his gigs.

The Session has been neatly chopped into separate grooves with each groove containing up to 10 stems of different microphone placements including 2 Different Kick Mics, Snare, Hats, Toms, Overheads and Front and Rear Ribbon Mics giving you the producer the chance to mix and master the drums anyhow you see fit. Included in the collection are also 73 full Drum Loops ready to drop into your productions alongside an extensive Drum One Shot collection of Hits and Drum Sfx such as Rolls and Flams.

Check out the demo to hear the incredible flexibility these samples offer and sample Jazz Drum - Mark Fletcher TODAY!

When these four come together they are able to cover some of the most interesting periods in jazz. Indeed they force audiences to question the limitations of modern jazz, limitations often set far too low. From Kind of Blue to Headhunters, new arrangements of jazz standards to material from Steely Dan. From ultra-groovy tracks from Billy Cobham to the intricate odd rhythms of Mahavishnu Orchestra and finishing off with new compositions by Gavita and Orr; it's often amazing how much musical diversity Fletch's Brew can cram into set-lists which often last for just over an hour at their most popular gig playing almost every weekend at the Ronnie Scott's Late Show.
（From  LOOPMASTERS）