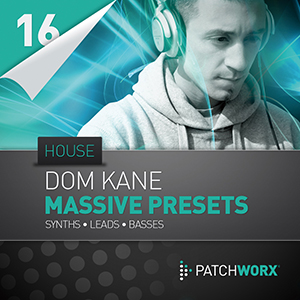 Patchworx from Loopmasters is a new concept which presents fresh and exclusive collections of hand crafted patches for the most popular soft synths, direct from the studios of our best producers and artist contacts. This title includes 60 custom made patches and also comes with 60 ready to edit MIDI files from the packs creators.

Patchworx 16 - House Synths is a collection of Arpeggios, House Basses, Leads and Pads exclusively created by Dom Kane, one of the more active producers in the Tech House scene right now.

The name Dom Kane appears in studios and DJ sets all around the world. As producer, his tracks have appeared in the playlists of DJ's such as Pete Tong, David Guetta, James Zabiela, Andi Durrant, Deadmau5, and many more. As a DJ, he's been a resident at some of the worlds most legendary clubs including Space Ibiza and Ministry Of Sound in London. As a sound-designer and engineer, the name Dom Kane appears in most electronic recording studios across the globe, having delivered work for Loopmasters, Fxpansion (D-CAM & Geist), Deadmau5 and Steve Duda (Nerve/Xfer), Ohm Force (Ohmicide), and even factory content for the legendary analogue synth company Moog.

In detail producers should expect to find here a great selection of patches which are designed to complement Progressive, Tech and Mainroom House productions, but will of course work well for other styles also.

The 64 Massive Patches included in this pack are comprised of 2 Arpeggios, 34 Bass Presets, 24 House Lead Sounds, 4 Pads - plus 64 MIDI Files.

The Patchworx series are brought to you by Loopmasters, and are a creative resource for producers who are looking to produce and perform their own musical parts, using genre specific sounds which have been designed by experts in their genre.

Patchworx titles will be released often and for a variety of the most popular soft synths, they are easy to download and install, and full instructions and support are available.

Create, Inspire and Perform with Patchworx - sound ammunition for your next production!
（From  LOOPMASTERS）