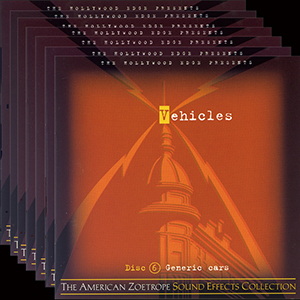 American Zoetrope and The Hollywood Edge have joined forces to extend their collection of epic sound effects, all from the sound vault of Francis Ford Coppola's San Francisco motion picture studio.

This 7-disc collection contains hundreds of original vehicle and moving machine sounds, recorded for the soundtracks of a wide range of films from war pictures to period dramas.

This second installment in the American Zoetrope Sound Effects Collection series, which follows the release of "Apocalypse Now" collection, will provide many essential effect for the professional sound designer's toolkit.
（From  HOLLYWOOD EDGE）