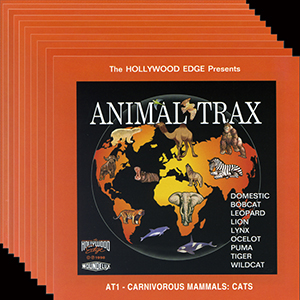 We put together this set after all the loud requests from our sound designer friends. Twenty years ago, all the rage was human sounds for the hidden ambient punch. You know, heartbeats, suffocating screams, and death wails, in unexpected spots, as in Brian De Palma and Coppola films. The very designation "sound designer" was invented right around then.

Now the hot, hot rage is animal sounds. And we're not talking about just jungle scenes, or frogs in beer commercials. Animal sounds are hidden in urban scenes and space scenes (I thought there isn't supposed to be any sound in space). Listen close, they are everywhere.

But, you are the sound designer. You know better than me how universally useful these effects can be.

So, we are proud to unveil what we consider to be the most essential collection of animal sounds ever assembled... ANIMAL TRAX.

This ten CD collection is filled to the brim, containing over 1200 tough-to-record animal sounds. "Lions and tigers and bears" - leopard growls, hyena laughs, snake strikes, gorilla grunts, baboon screams, whale, and dolphin calls, to name just a smattering. This treasury of authentic recordings was recorded to perfection from the four corners of the world by sound recorders risking life and limb. Then it was digitally edited in the relative safety of the SOUNDELUX studios.

With ANIMAL TRAX, the effects list never ends. It grows every time you look at it. From exotics and endangered species, all the way to our domestic animal friends of every persuasion. Think of an animal and you will find it here. With this ultimate menagerie of effects you will find bats, pumas, frogs, toads, snakes, wolves, coyotes, as well as a jungle full of exotic birds like macaws, peacocks, vultures and owls, and...and...and.

This is the last time you'll ever have to foley a fruit bat. As always, ANIMAL TRAX is guaranteed, or your money back! So give it a shot.
（From  HOLLYWOOD EDGE）