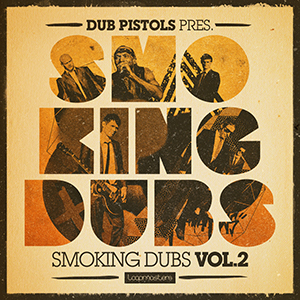 It is with extreme excitement Loopmasters welcome the Dub Pistols to the Artists series for a seriously heavyweight slice of Smoking Dub
Fresh off the back of the latest Dub Pistols album 'Return of the Pistoleros' and coming straight from the heart of the critically acclaimed Dub Pistols camp produced by frontman Barry Ashworth and Bill Borez (Zero B, Effective records, Dub Pistols, Dogtown Clash, General Narco ) at Loftworkz Studios West London, The Dub Pistols "Smoking Dubs." is a slice of dub goodness from the wild side of a production library spanning 20 years covering genres from Dub, Hip Hop, House, Breakbeat, Dancehall, Drum and Bass, Jungle and few more thrown in for good measure.
Smoking Dubs has been 6 months in the making and features an impressive collection 1Gb of Live and programmed loops and one shot sounds from the legendary Dub Pistols including brand new and exclusively recorded Drum and Percussion loops, Horns by the legendary Tim Hutton, Fresh Guitar and Piano Skanks, Dancefloor Tearing Bass Lines, Rig Jolting Riffs and Subtle Ambience plus more Dub Sirens, Effects and One-Shots than you can throw at a fully loaded sampler.
From their early singles for Concrete Records to their genre defying 'Six Million Ways To Live' LP, the Dub Pistols have always added a much needed Rock n Roll swagger to the UK's dance scene. Chewing up Hip Hop, Dub, Techno, Ska & Punk & spitting them out in a renegade futuristic skank, consistently deifying genres & exceeding the highest of expectations at all times.
Their genre-mashing abilities have led to remix work for the likes of Moby, Crystal Method, Limp Bizkit, Bono, Korn & Ian Brown, and seen them work with Hip Hop legend Busta Rhymes on 'One', a track for Blade 2 & 'Molotov' on the Y Tu Mama Tambien soundtrack.
In recent years the band has mutated from a studio based duo into a fully-fledged live act often featuring the talents of guest vocalists Rodney P, Specials front man Terry Hall, rap wunderkid T.K., Sugardaddy horn-blower Tim Hutton & scratch maestro DJ Stix. This year's Glastonbury saw Neville Staple from The Specials join the Pistols live on stage for the encore 'Gangsters'.
In Detail expect to find 999Mb of 24Bit 44.1kHz loops and one shots including 36 Bass Loops, 69 Drum Loops, 11 SFX Loops, 43 Music Loops, 35 Percussion Loops, 8 Bass Stabs, 214 drum Shots, 77 Dub Siren Sounds, 12 Instrument Hits, 218 Rex2 Files and 34 soft sampler patches.
If you are looking for the most exciting Dub samples you will see this year then you have stopped at the right place make sure you check out the incredible demo track and download the free to use taster pack then get ready to sample the incredible Dub Pistols - Smoking Dubs TODAY!