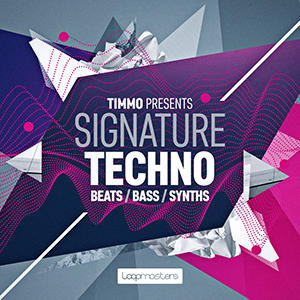 Loopmasters present Signature Techno, a tour de force of inspiring Royalty-Free samples from Techno supremo Timmo! Keep the main room jumping with flavours of the early Techno scene, featuring Warbling Basslines, Pounding Beats, Syncopated Percussion and Epic Synth Action!
Signature Techno transports you back to the era of old school Techno, with authentic sounds meticulously made using the equipment and studio techniques of 90s Techno. Loopmasters bring you a huge set of evolving Loops, full-bodied Drums and Subby Basslines as Loops and One Shots. A selection of 11 Multi-Sampled instruments are accompanied by over 80 MIDI Loops, enabling you to customise the sounds to suit your own style.
Hailing from Bulgaria, Timmo has been on the scene since 2009 with a remix of TRNSSTR - The Joker, released on Timo Garcia's Berwick Street and featured on Carl Cox Global Radio Show. After releases with Fone Audio, and support from Adam Beyer, Alan Fitzpatrick, Joseph Capriati, Richie Hawtin, Dubfire, Timmo scored his first record on Sian's Octopus Recordings. In 2014 he released his first record on hugely successful techno label Drumcode - played by the biggest names in the Techno scene including Adam Beyer, Sven Vath, Richie Hawtin and Sasha, but also crossed over into mixes by Tiesto, Above & Beyond and Roger Sanchez among others.
In detail expect to find 1.57Gb of content with 747 individual Wav Samples. There are a total of 456 Loops - 63 Bass Loops, 53 Full Drum Loops, 60 Kick Loops, 170 Top Loops, 64 Music Loops and 46 Percussion Loops. The 291 Single One Shot sounds are made up of 68 Drum Hits [16 Claps, 16 Hats, 20 Kicks and 16 Percs], 20 Bass Hits, 36 FX Hits and 21 Synth Hits. There are 5 Multi-Sampled Bass Instruments [consisting of 45 Samples] and 6 Synth Multi-Samples [from 101 Samples]. 89 Music and Bass Loops are included as well as 61 Software Sampler Patches pre-formatted for NNXT, Halion, Sfz, Kontakt and Esx24. 456 Apple Loops and 465 Rex2 Loops complete the pack.
Loopmasters bring you a pack bursting with energetic grooves, suitable for Techno, House, Trance and a host of other Genres. Delivered at 24 Bit 44.1kHZ Wav files, and at 126 BPM.
Signature Techno supplies you with the best tools for a rock-solid Techno banger. Download the Free Taster Pack and check out the Demos today!