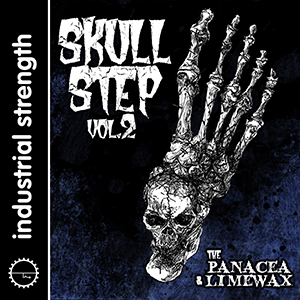 Limewax and The Panacea return with an onslaught of fresh fire and brimstone for your DAW. Tear open Skullstep Vol. 2 and unleash a raving mad injection of customizable DnB and Industrialsounds straight from the gates of Hades and Industrial Strength Samples.
This maniacal pack delivers an ominous onslaught of twisted Drones, acid tone Loops, and wigged-out Effects. Inflict serious wrath with gritty Drum Shots, distorted Beat Loops, and merciless Bass Loops. With blinding Stabs and Pads, this sound set is primed to leave goosebumps in the wake of any hard bass production.
The Panacea and Limewax are a steadfast match lit in hell. Each known for hard-hitting productions, the longtime co-conspirers combine minds to wreak masterful destruction.
From a young age, Ukrainian musician, DJ, and producer Maxim Anokhin has proven himself a sonic pacesetter, harnessing the darker sounds of atmospheric dance as Limewax. In addition to running his own LB Recordings, his uniquely-compelling acidic textures and frenetic breaks have been released on mainstay DnB labels including Freak Recordings, Tech Itch, PRSPCT, and Position Chrome.
Since 1996's influential "Low Profile Darkness," German producer Mathis Mootz has continually redefined the forefront of techstep by combining hardcore techno, drum 'n' bass, rave and industrial into a truly explosive force. The Panacea's prolific discography has been released by the likes of Kniteforce, PRSPCT, and Mootz's own label, Position Chrome. He has remixed Einstuerzende Neubauten, Foetus and The Melvis and continues to headline the Therapy Sessions Events world-wide alongside Limewax and artists like Counterstrike, Current Value and Gancher & Ruin.
Joining forces to produce Skullstep Vol. 1 and 2, the duo brings versatile sounds of uncompromising caliber, designed to amp up your studio flow like the white rapids of the River Styx.
This multi-use, license-free download is presented in 24-bit, 44.1-kHz glory. With options in Acid wav, Rex.2 and Apple Loops, these sounds are ready to reign in any DAW for maximum flexibility.
Out of the darkness comes a skull rattling mayhem like none other. Check your headlamp and step into the sonic underbelly.