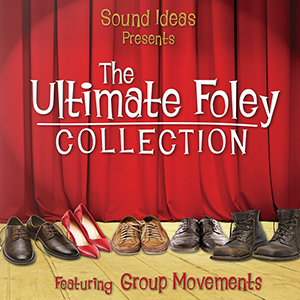 Multiple chair movements were used, including groups fidgeting and getting up and down - both in and out of unison - from Bleachers, Conference Chairs, Metal Chairs, Church Pews, Theater Chairs and Wooden Chairs.
Cloth Movements

Sounds of clothing movements on both individuals and groups as they mill about, walk and run.
Prop Movements

Movement reverbs were recorded in large and small rooms, using both large & small groups, while they were running, walking, and shuffling. Movements included bare feet, boots, dress shoes & sports shoes on a variety of surfaces, including cement, hardwood, linoleum & marble.

The broadcast wav files are provided in their original 24 bit / 48 k format on 3 DVD ROMs, with fully embedded metadata and a separate list of the complete contents. The library is also available as a Download in 16/44.1, 16/48 or 24/48 WAV file formats. This is the Ultimate Foley Collection, only from Sound Ideas.
（From  SOUND IDEAS）