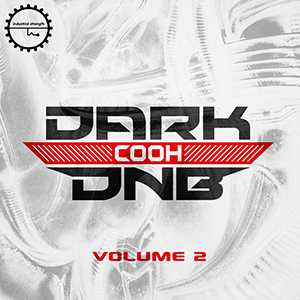 Cooh and ISR return with this expanded set of brutal turbulence, all in the name of Drum n Bass. It's time to tame the vicious vibrations of Dark DnB Vol. 2 in your favorite Daw.
Straight from the studio of masterful Bulgarian producer Ivan Shopov aka Cooh, the second installment of Dark DnB features a fresh set of tight one shots, raging loops, badass Reese bass sounds and wrathful Breakbeats. Load these underground sounds and kick up the pulse of your DnB, Jungle, Dubstep, Hardcore, Crossbreed and other Electronic tracks.
The prolific Cooh has recorded for such labels as Position Chrome, PRSPCT, Freak, LB, Dim Mak, Algorithm and Ad Noiseam. He's earned international acclaim through rigorous touring, dominating dance floors from Australia to Hungary. A singular producer of DnB, Dubstep, and IDM (peppered with hints of traditional Bulgarian sounds with his Balkansky project. Cooh drums up his latest sonic inspirations, studio know-how, and pro gear to realize Dark DnB Vol. 2.
Volume 2 includes a full batch of 16-bit, 44.1 kHz samples, all formatted in 16 Bit Wav, and Rex.2 for maximum utility. The one shots are ready for use with Battery 4, NI Maschine giving you top versatility for studio and live applications. This pack also Features 2 ISR Bonus Battery 4 Kits featuring over 80 new sounds from across our packs.
This epic pack expands upon the swirling vortex of Dark DnB Vol. 1. Together, the two audio soundsets form an uncompromising pair.
If you're ready for fire-breathing ferocity, Dark DnB Vol 2. does not mess around. Dial in this pack and unleash the dual beasts named Drum and Bass.
（From  INDUSTRIAL STRENGTH）